The woods are lovely dark and deep... 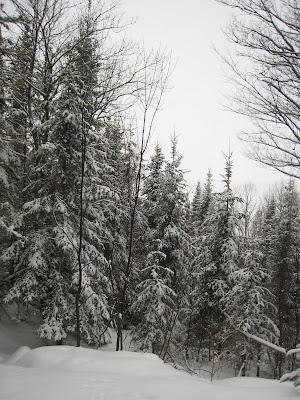 Winter has not made an appearance in Southwestern Ontario this year. As the grass remains green and the temperatures hover just above zero, Hippo and I decided to search for our lost Canadian winter. Near the small town of Whitney, about an hour northwest of Huntsville, we spent the weekend at a resort.

The Couples Resort hosts about 35 couples making for a very private, peaceful and quiet atmosphere. The rooms have a jacuzzi and fireplace with gorgeous views of the frozen Galeairy Lake marked with the occasional dog-sled or snowmobile trail. Two lone ice-fishing huts stood as sentinels of the Galeairy lake. 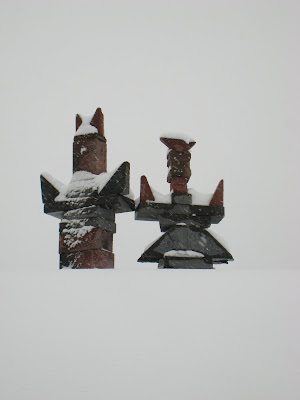 The meals served were splendid. After a marvelous eggs Benedict breakfast, we took full advantage of the recent snowfall to do morning trek through the back-wood trails on the grounds. Footprints of hares, foxes and other creatures littered the freshly fallen snow. Many snow capped mushrooms and even lichen hung from the snow-laden evergreens. The Canadian winter in all its glory. Having burnt off the morning calories in two hours, we returned for a light lunch of smoked duck, cherry tomatoes, brie and toast. 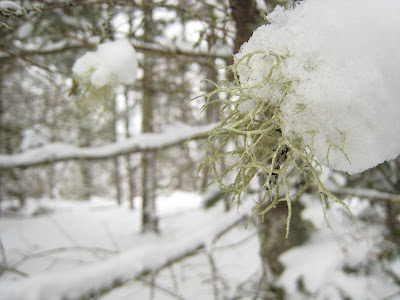 The resort also provided free rental of snowshoes, skates and cross country skis. We decided to try our luck on the well groomed trails in Algonquin Park just adjacent to the resort. Cross country skiing is hard work, and really I think I needed lessons. I really was walking more on my skis than gliding on them. However, another caloric burning exercise accomplished before our 5-course dinner completed with a dessert I had to doggy bag back to the room. 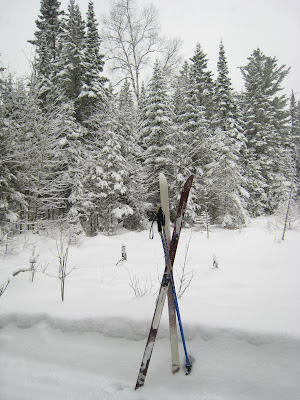 The perfect was capped off with a soak in the Jacuzzi (after the day's strenuous adventure) by the wood burning fireplace with a marvelous bottle of Shiraz. 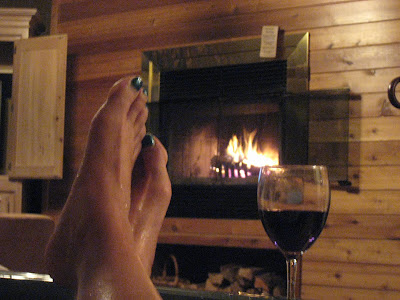 On our second day, we decided to take a leisurely horseback ride through the woods. Another magical experience save for a near brush with death or severe injury at the end of our ride. As we neared the end of the trail about 5 minutes out from the ranch and as we crossed a snow mobile trail, my horse (and my guide's horse) was spooked by a speeding snowmobile as it darted around a corner. Rebel (no kidding, that was the horse's name) took off like a bat our of hell and I was thrown off the horse in a matter of seconds.

Thoughts of Christopher Reeve flashed through my mind. However, the incident was over in an instance and before I had time to even appreciate any fear. Before I knew it, I covered in snow and as I looked around, I realized that I was sitting in snow bank. The recent 5 cm snow fall with the existing accumulation cushioned my fall. That and the extra layers of winter clothing I suspect. I emerged unharmed and most astonished by my good fortune. No head trauma, no concussion, no broken bones, and I didn't even lose my glasses.

Hippo didn't even see my speedy dismount as he remained on Static, his horse (on the opposite side of the snowmobile trail still waiting to make his crossing) . Meanwhile, both Rebel and my guide's horse had returned to the ranch and ambled by into their stalls unassumingly. I guess any landing you can walk away from is a good one. I certainly had plenty of horseshoes up my ass this day. 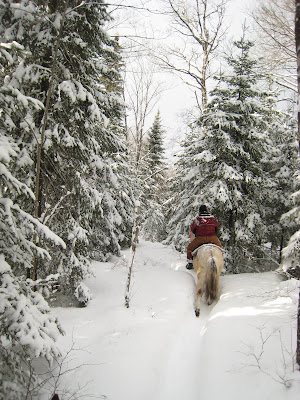 The three geniuses of Chicago. 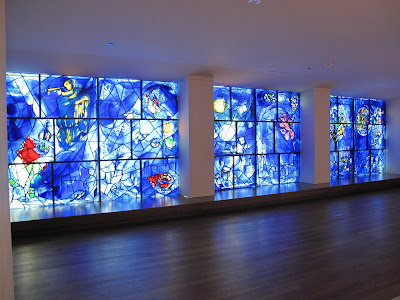 It has been more than a decade since I last visited Chicago. I was here to attend the graduation of my cousin from Northwestern. The weather was hot and humid with some rain the air. My relatives and I took in the Chicago Architecture Foundation boat tour and Navy Pier.

This visit was in that very temperamental season of Spring where four seasons can occur in a day. My girlfriend Noel and I arrived on a cold, wet and windy Friday. We had a marvelous lunch at Sunda and then walked the damp sidewalks of the Magnificent Mile. After some purchases were made at Sak's, and braved the stormy walk back to our hotel where we ate a much welcomed dinner of at The Lockwood restaurant in our hotel , The Palmer House Hilton. It was quite fortunate that we did some shopping on this day as we made the belated revelation that many shops were closed on the Sunday of the weekend due to the Easter Holiday.

Dinner consisted of Blue Hill Bay Mussels in garlic, thyme, shallots and chardonnay broth and Bertha's Brownie (a glass of chocolate milk mousse, chocolate ice cream, chocolate sauce and almonds.) Legend has it that the brownie was created in the Palmer House but Bertha. Bertha was the wife of Potter Palmer, the tycoon who built the first Hotel for her as wedding gift. The first hotel burned down 13 days later in the 1871 great Chicago Fire. Thankfully, Potter Palmer had deep pockets and the second hotel was quickly built as the world's first fireproof hotel. The glided peacock gates at the main entrance and the glorious lobby ceiling are certainly a wonder of old world splendour. 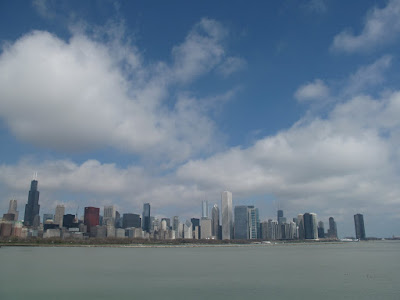 The sun came out the next day just in time for our bus tour of Chicago. Nicknamed the Queen of architecture. The streets of Chicago boast nearly every architectural style of the modern era. From the ashes of the great Chicago fire of 1871, the first skyscrapers rose making the reputations of Louis Sullivan and Frank Lloyd Wright. Frank Lloyd Wright's Robbie house, Mies Van Der Rohe's S. R. Crown Hall which is the home of the College of Architecture at the Illinois Institute of Technology and Rem Koolhaas's McCormick Tribune Campus Center were the three highlights of our tour. We also passed the home of a certain very famous former law professor of the University of Chicago (and waved to the Secret Service detail on the barricaded street).


After an morning of absorbing all that stunning architecture, Noel and I decided to have lunch at another Chicago institution, the Walnut Room on the seventh floor of the Marshall Field building. Opened in 1907, it was first Chicago restaurant opened as a tearoom for women to come and rest after their shopping. The idea bloomed and the restaurant become popular with many ladies social clubs.

Here we took in the the original Circassian Walnut paneling, a 17 foot marble fountain and Austrian chandeliers as enjoyed a traditional potpie made from Mrs. Hering's original recipe. Mrs. Hering was the inspiration for the Walnut room. She was a millinery store clerk at Marshall Field who shared her lunch (a chicken pot pie) with a tired customer. 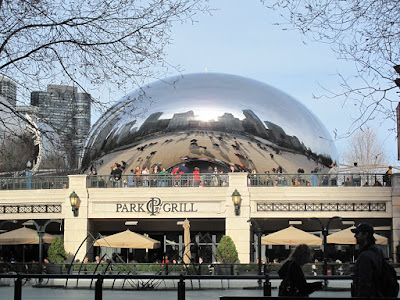 Much has changed too in the Chicago landscape since my visit a decade ago. None though more dramatically than the development of Millennium Park adjacent to the Art Institute of Chicago. Sporting the sculptures of The Cloud Gate (or the Bean as the locals have dubbed it), Lurie Gardens, Crown (interactive) Fountain and Gehry's Jay Pritzker Pavilion, this was a park is a must see stop on any tour. The photographs of the Chicago skyline of the surfaces of Cloud Gate reflect the awesome architecture of this city. 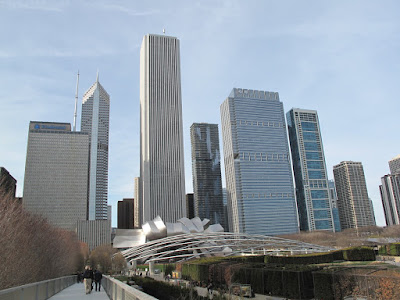 Our Saturday day was completed by a tour of the Art Institute of Chicago. Home to Chagall's American Windows (a wonderful stained glass composition), Seurat's A Sunday Afternoon on La Grande Jatte, Bourke-White's BW photographs of the Great Depression, the Thorne Miniature rooms and many other masterpieces. My favourite surprise were the pictures of Ivan Albright especially the picture of Dorian Gray (which was used in the 1945 movie of the same name).

Dinner was then at Sable Kitchen and Bar. This was tapas style restaurant with a very delicious menu selection matched with an equally delicious cocktail and wine menu. The real delight was that the dishes came in appetizer and full meal sizes. Thus permitting Noel and I to sample many items on the menu: Deviled eggs (topped with black trumpet mushrooms and truffle oil), crispy pork belly BLT, Tuna tartar Tostadas, Grapefruit and Avocado with Rock Shrimp topped with basil vinaigrette, Pistachios Duck Sausage with Parmesan grits and sour cherries and warm blueberry donuts. It took us even longer to read the cocktail menu but settled on the War of the Roses (Pimm's, Bombay Dry Gin, St. Germain, fresh mint and lime).

All this great dining was just a prelude the weekend's highlight and third genius of Chicago: Alinea.
Posted by naixuhs at 9:45 p.m.

During this unseasonable warm April weekend, I attended the Skills competition for Amateur Chocolatiers. My nephew had the distinct honor of representing the Red River College in the 2011 Competition. $5000 worth of Chocolate was provided by Cacao Barry for the weekend competition. There were three categories in this competition: the showpiece, 2 types of bonbons and the plated dessert. A divine soothing chocolate vapor wafted through the kitchen. I was fortunate to taste a few bonbons too. In an all to common event, a few showpieces were broken in transfer/transport. Evoking the spirit of the documentary "Kings of Pastry", the fierce competition came down to a lot of last minute hussling and plenty of drama and excitement.

Another fabulous weekend away at Rundles in Stratford. Chef Neil and Mike were in fine form and wiped us all into shape by Sunday. Gosh, I'm getting heartburn from looking at these pictures again.